I know it’s been a long time since my last blog. Obviously, I will be leaving out quite a bit, but here are pictures from the most interesting thing I have experienced in the last month. I went to a village (the one where I went previously for my trek). It had a double purpose. I did my survey and also attended a week long mela (festival) and masked dance. Squeezed in the middle of all this craziness was a 5-year old boy’s mundin (hair cutting ceremony). It was an incredible experience high in the Himalayas. 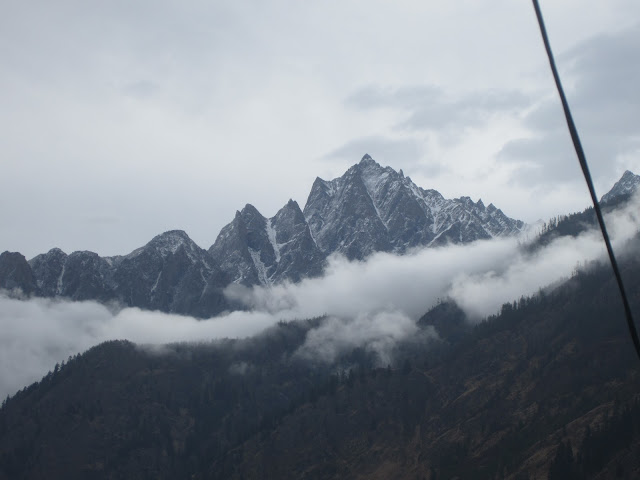 Lata is really close to the beautiful snow-peaks! 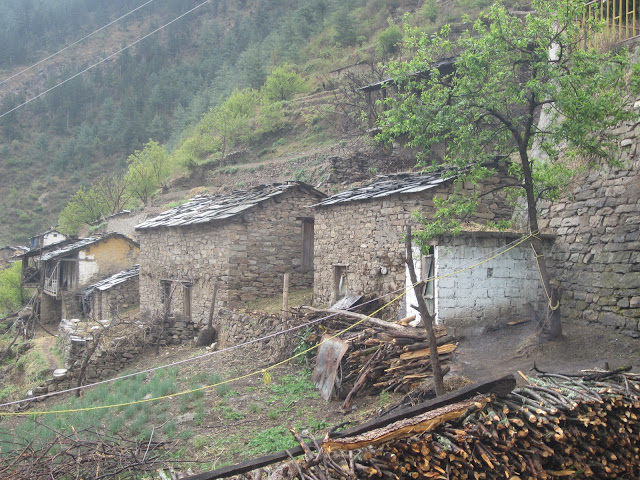 This is how wood is stored and some of the houses used for the animals. 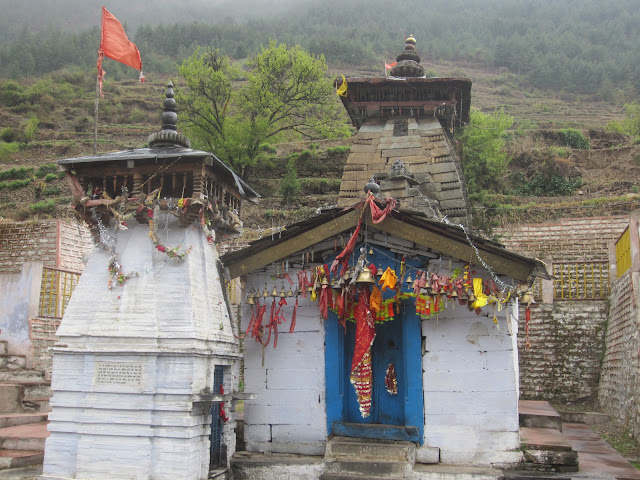 This is the older of two temples in the village (several hundred years old). The goddess here is Nanda Devi, which is the name of the largest peak in the Indian Himalayas. Lata is one of the villages closest to Nanda Devi. 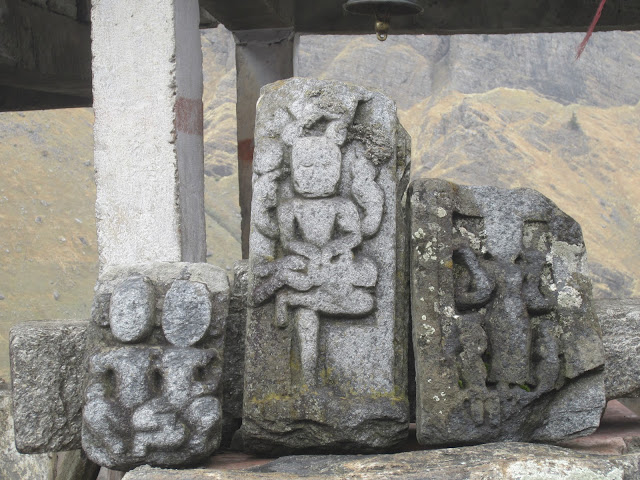 Here are some stones from the temple in Lata. It is likely that they are even older than the temple pictured above. The people here were formerly shepherds but now mostly practice farming and animal husbandry. They gave up shepherding because the area around Nanda Devi has been turned into a biosphere by the government in the name of environmental protection. It was in this area that they used to graze their sheep. Interestingly, there is a dam being built on the river right below the Nanda Devi biosphere, and everyday we heard blasting which sounded like a bomb going off. It turns out they are building a better road. This is also a very important area politically because it borders Tibet. 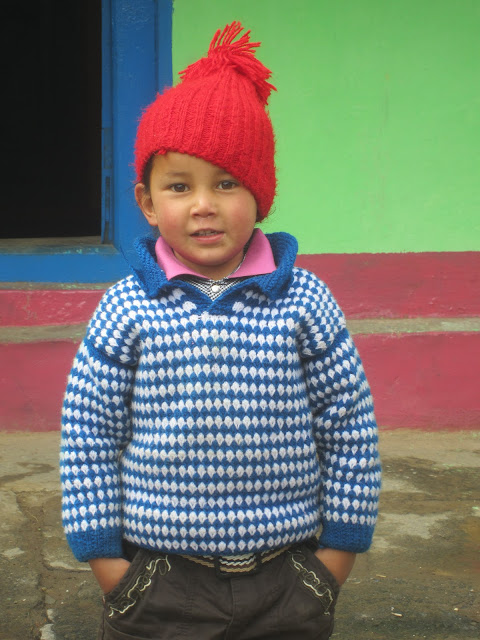 This is Nitin, pre-haircut. He is five years old and studies at an English medium school although no one in his family speaks much English. His parents both live in Lata where the school is taught in Hindi and only goes up to grade 8. In order to provide a better education for their son, his parents have sent him to the city nearby. He lives with his aunt and uncle who do not have any children but seem to greatly enjoy having their nephew live with them. 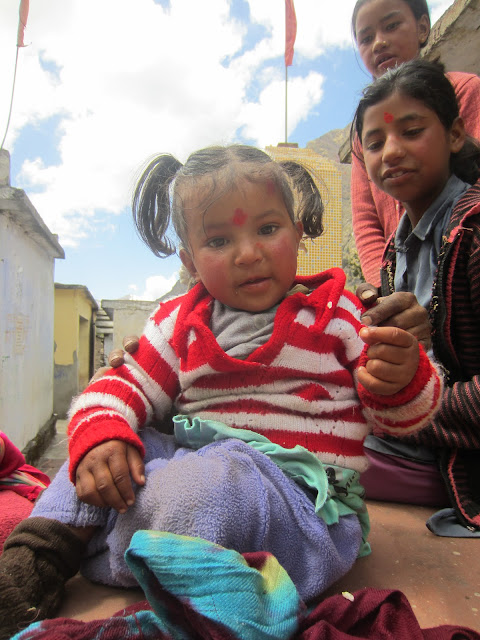 This is 2-year old Munshi. She is adorable. One morning, she asked me to take her to the temple. In Garhwali, she said, Me mundir jana cho - I go to the temple. How could I refuse? Ritu is watching out for her on the right. Ritu was one of my very good guides in Lata. I am very impressed with her although she definitely needs more sleep. She would go to the temple all night for the festivities and then wake up and walk about 30-45 minutes to school at 7:00am. 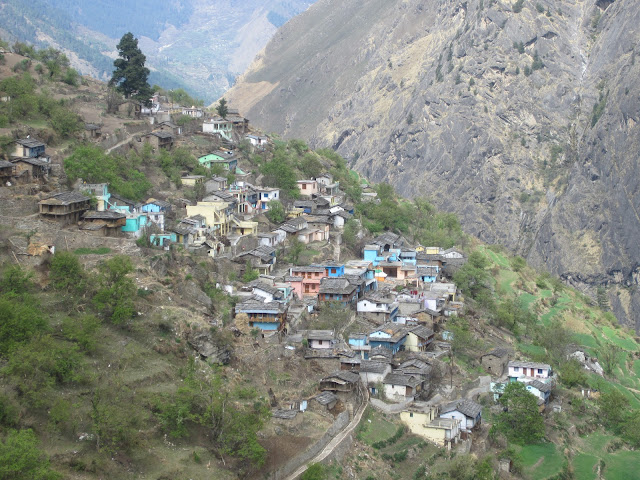 This is a view of Lata from where I went with two girls to graze the cattle. In Lata, there are two villages - one for the summer and one for the winter. People move down to the winter village to stay warmer. It gets really cold here in the winter, and they get plenty of snow. The village is located at about 7,000 feet. The summer village is about 1 km uphill from the road. 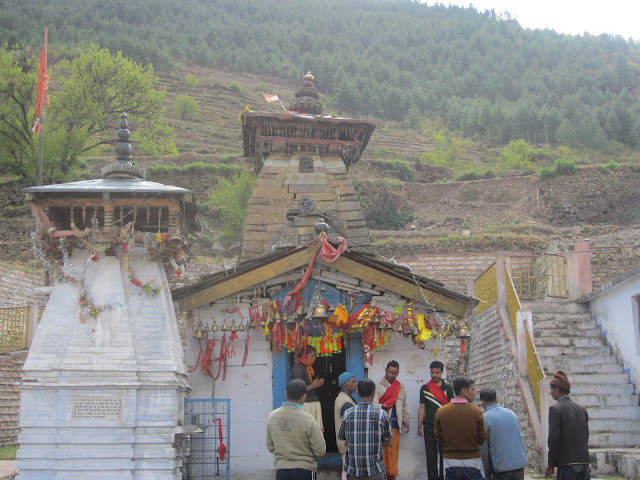 Almost every day around noon, we visited the upper temple for a pooja (worship). There was a ritual ceremony, followed by the sacrifice of a sheep. This only occurs during one week of the year and is a very special time in this village. Throughout the ceremony, people would go around passing out prasad (basically holy snacks) consisting of puffed rice, plain white rice, fried dough balls made of millet, coconut pieces, peanuts, and white balls of sugar. After the sheep was killed, it was cooked up with lots of butter and spices and served to everyone. (Yes, I ate it. I am not sure I can still be called a vegetarian after this carnivorous week.) 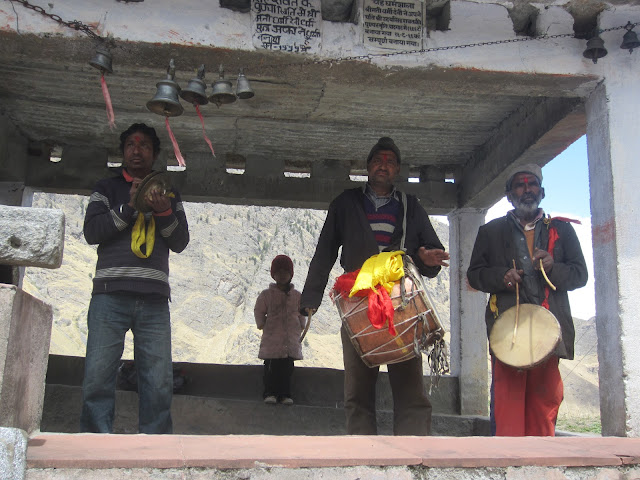 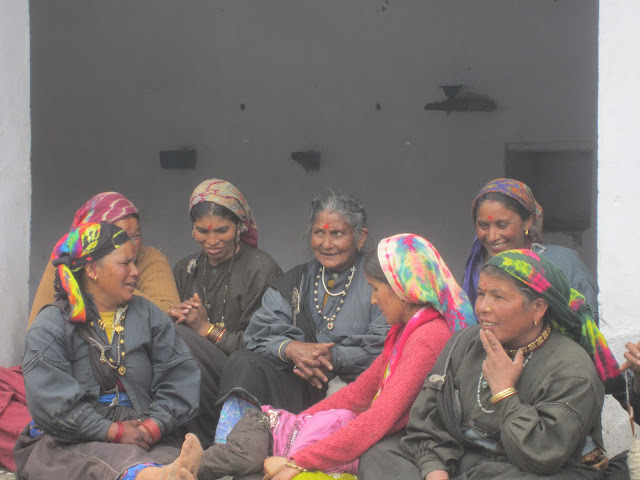 These women are sitting at the temple wearing chatting, watching the ceremony, and wearing their traditional dress. Many people from lower regions say the people here have a Nepali look about them because they live in a border area. 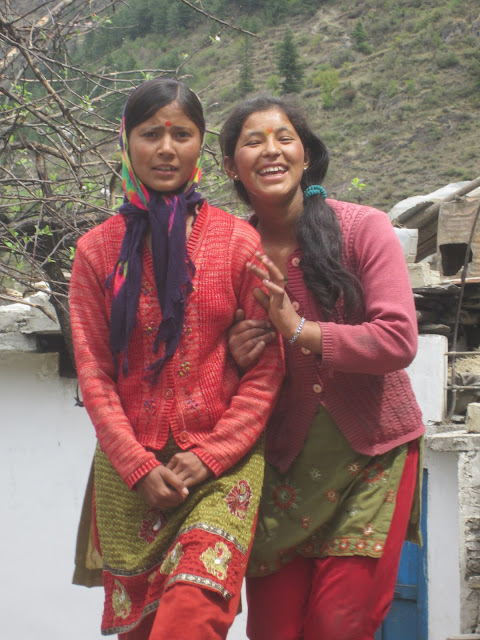 I stayed in the house of the girl on the right. Preeti, on the left, always seemed to have that worried look on her face. She came from another village to Lata to help her extended family for the mundin and to attend the mela. 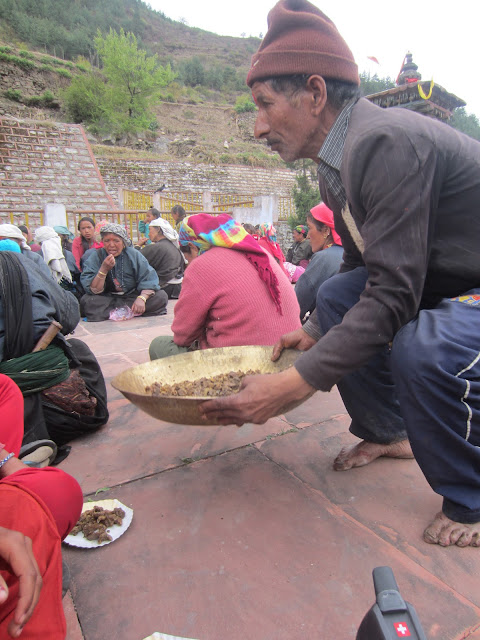 Here we are eating sheep at the temple. It actually tasted pretty good most of the time. 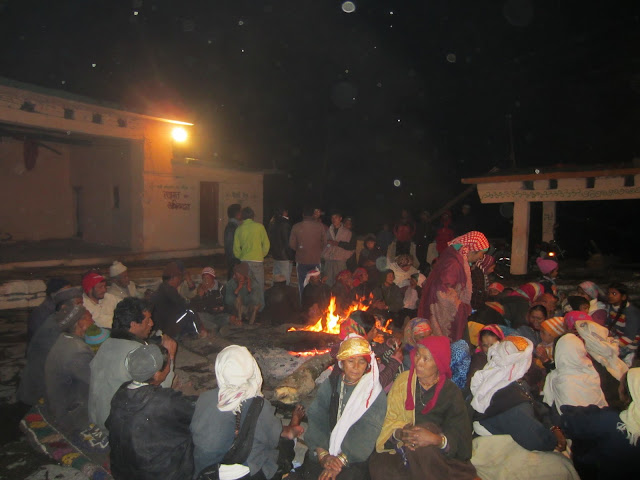 At night, we went to the lower temple. For the first 3 nights, everything proceeded in the same way. A man would chant traditional songs into a microphone. Then, both the women and men would dance and sing in a circle around the fire. Finally, a man wearing a mask would come out to put on a show. It was kind of a comedy, which I did not understand because it was in Hindi. However, it was still funny, especially when he went around throwing flour on everyone. 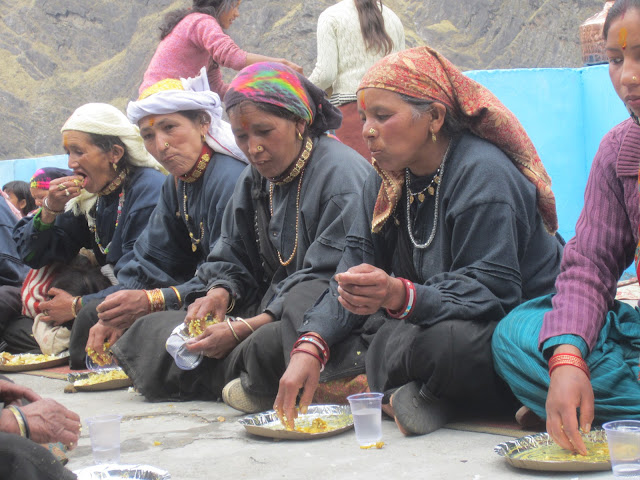 During this time, we would go to a different house everyday to eat lunch and dinner. Certain families would be responsible for feeding the entire village. The family I was staying with was super busy during this time. They had both the mundin and mela going on. This meant they had relatives and the whole village to feed! They cooked the rice, dal, vegetables, puri, chicken, and sheep on fires in pots big enough to swim in. In this area, I ate a lot of rajma (kidney beans) and potatoes, both of which are grown in Lata. (Don't worry, I at tried to help at least a little bit by making puris and doing a few dishes.) 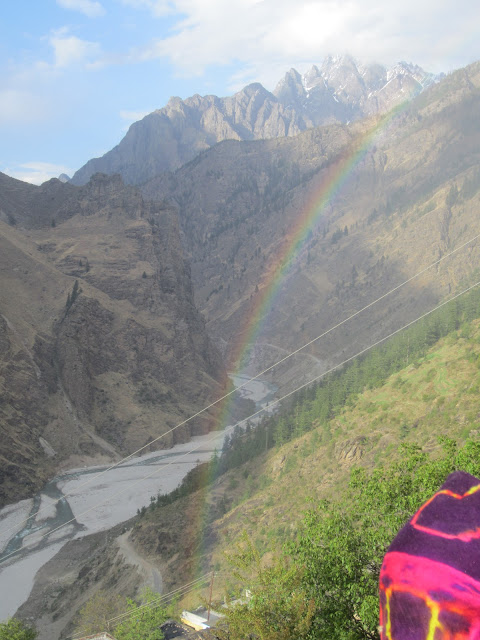 I should have run down to get a pot of gold because I could actually see where this rainbow ended! 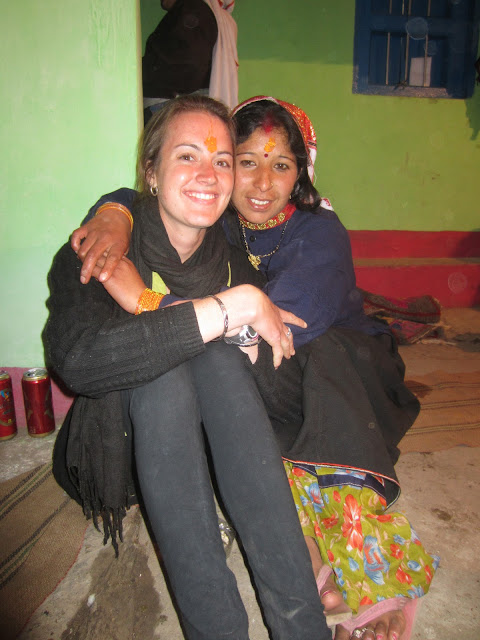 Here I am with my new friend Leela. She let me borrow her traditional dress to wear (see the next picture). This dress was made to be durable. Women before marriage would receive an outfit from her parents. It was supposed to last three years, after which she would be given another by her in-laws. Child marriages used to be very common in this area, but people seem to be marrying much later now. 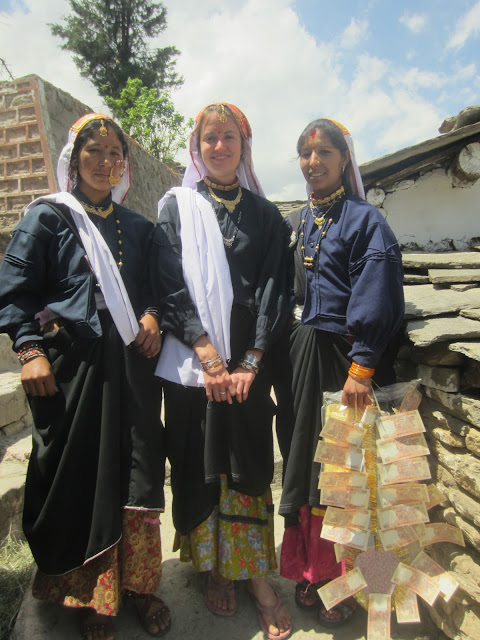 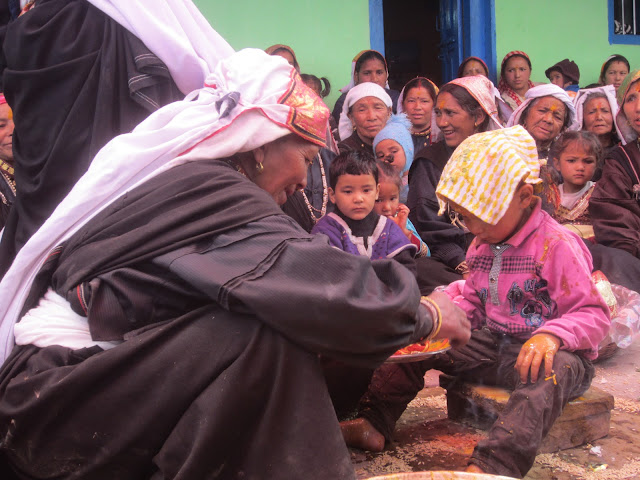 When boys are between 3 and 5, they have a hair cutting ceremony. It is a pretty big deal, and families must spend tons of money. The meaning of the ceremony seems to vary across Hindu households. Basically, it seemed to me like the chance to treat the young boy as a prince ((see below) and offer him blessings. 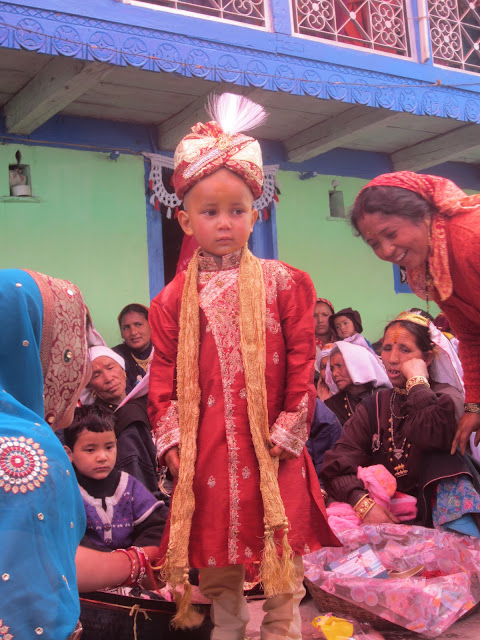 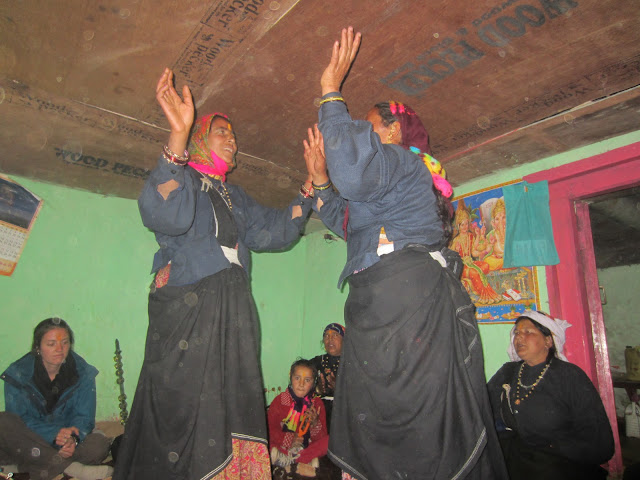 The women here are very musical. They love to dance and sing. Almost every day/night, I attended the mahila's sangeet (women's music). It would get a little more interesting when the women had been drinking the local brew. One night in particular, a woman who had plenty to drink was grilling me in Hindi. She was pretty hilarious. She kept saying she did not speak English, literally - "English (wave of the finger), no." 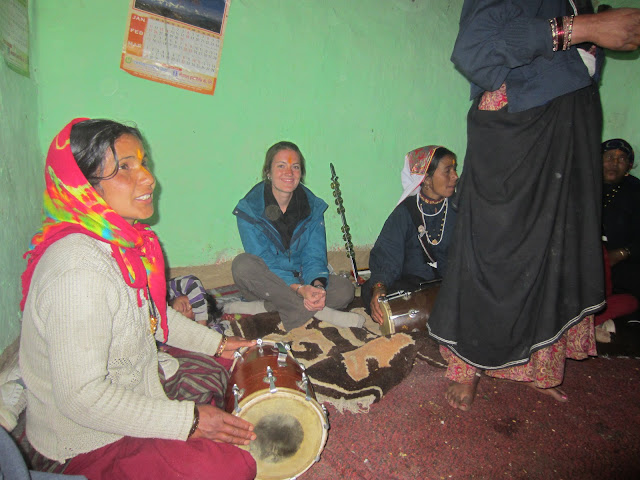 I also got to play the drum that the woman on the left is holding. 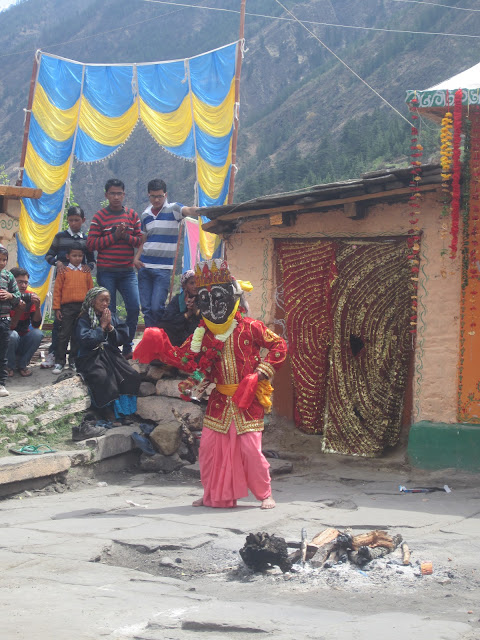 The last day of the festival was the most exciting. We were at the temple the entire day and night. We only took breaks for chai and lunch (and I actually think I did the most interviews this day oddly enough). There were a number of different masks and costumes. Probably one of the funniest parts was seeing all the boys in the village dressed as girls. One of the boys we were staying with was dressed as a Garhwali woman when I came back to my room. It caught me off guard because I did not know it was coming. I laughed and told him how beautiful he looked. =) The dancing went on until 5-6am, but I only made it until 2:00am. It was quite good, but I was basically lacking sleep the entire week. 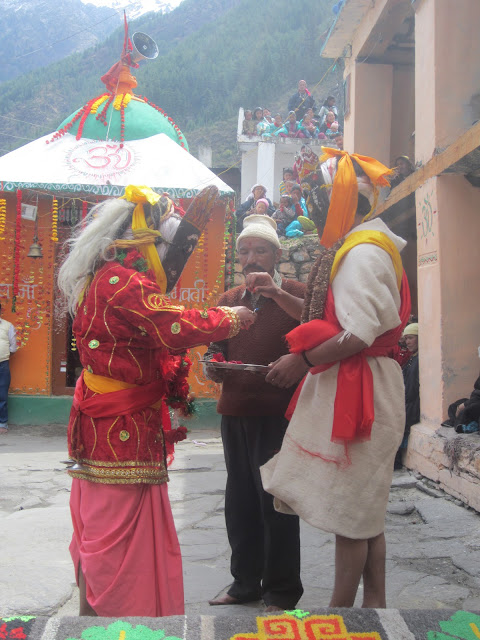 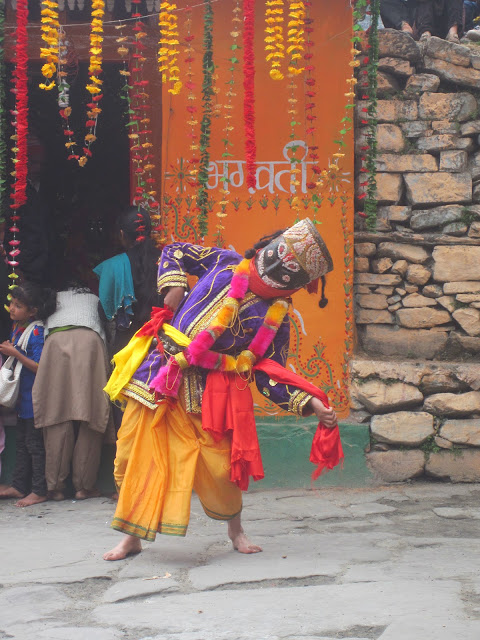 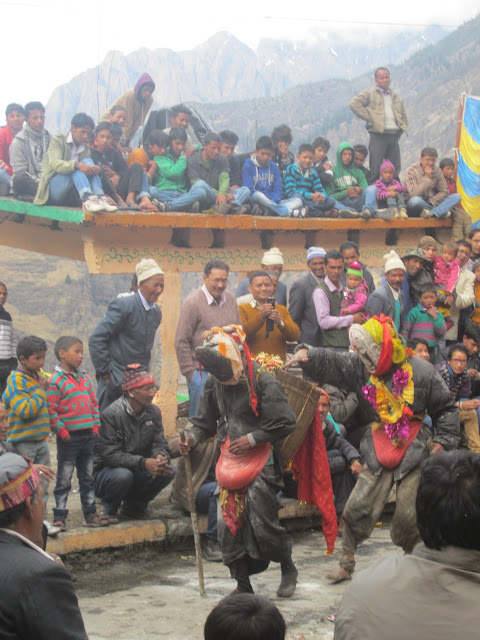 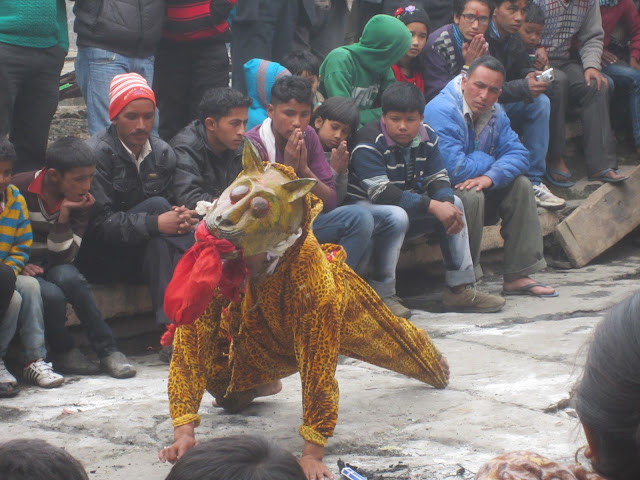 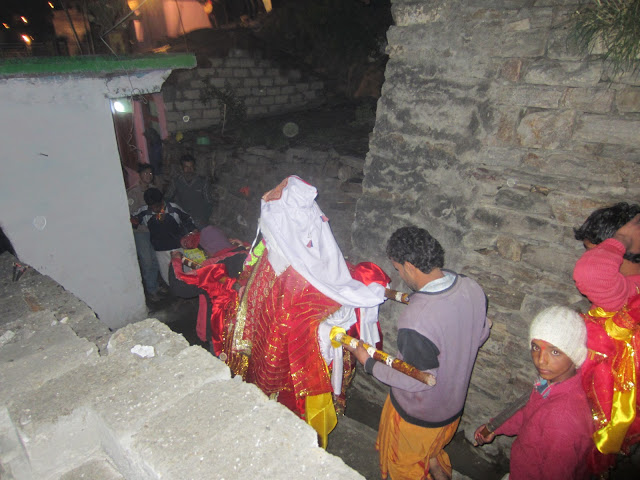 On the last night in the village, we attended one more religious event. The Nanda Devi (goddess) statue was taken to each house in the village. Along the way, the other villagers joined us and began singing. Taking the goddess to each house meant that she was giving blessings to each family. We finished up at the above temple where Nanda Devi will rest and look out for the village. One final sheep was sacrificed, prasad was given (this time no sheep), and we went to bed. It was a pretty special grand finale.

By the way, my water sample here came back clean - no bacteria.